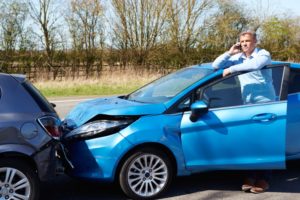 New York Vehicle and Traffic Code Section 1129 establishes strict rules that prohibit one car from following too closely behind another vehicle. A rear vehicle is mandated by the law not to drive too closely behind the lead vehicle.

A determination must be made on whether a motorist in a rear vehicle is following a lead vehicle too closely by considering whether there is sufficient space between the front and the rear car in light of the current conditions on the road at the time. Traffic conditions, vehicle speed, and road conditions are all factors that go into determining if the rear driver is following too closely or not.

Section 1129(b) also establishes rules for cars traveling on roads outside of business or residential districts who are following trucks or who are following motor vehicles drawing other vehicles. Under these circumstances, the rear driver should leave enough space that a car which is passing could enter into that space without risk.

In other words, if you’re behind a truck or a vehicle that is towing another car, you have to leave space for someone to pass.  Drivers traveling in a caravan or motorcade also need to allow enough space to pass, except in cases where the drivers are in a funeral procession.

Penalties for Following too Closely

Drivers need to know that if they get too many points on their license – more than 11 points in 18 months – their license is subject to being suspended. Getting four points would get you more than 1/3 of the way towards a suspension of your license under this rule.

Fighting these penalties is important and you can do this by trying to argue that you were not following too closely because there was actually a sufficient amount of space to be safe. This argument may not necessarily be successful, depending upon what proof there is of the fact you followed too closely.  However, the fact that “too closely” is a subjective measurement does open up doors for you to defend yourself.

In some cases, however, accidents happen due to drivers following a lead vehicle too closely. When this occurs, the driver who was in the rear vehicle is typically presumed to be negligent if a civil lawsuit is filed against him.

The theory is that only a negligent driver would fail to leave sufficient space to drive safely and avoid a collision.  Because the damages that could be obtained by victims of a collision could be very high, it is important to get prompt legal help for anyone who has been accused of following too closely and causing an accident.

Anyone who is cited for following too closely should talk with a lawyer about what they can do to try to keep this black mark off of a driving record.

How a New York Traffic Ticket Lawyer Can Help

A New York traffic ticket lawyer can provide invaluable assistance in fighting a ticket you receive for following too closely. It’s important that you talk with an attorney as soon as possible as you have only a limited amount of time to respond to your traffic ticket and you do not want to take a chance on being found guilty of a moving violation and facing the consequences that can result.

Contact NY Traffic Firm and our legal team will assist you in fighting the allegations or in negotiating a deal to protect your driving record and reduce the penalties you face.