Got Cited by NYS DMV for Cell Phone Use While Driving? Fight Back! 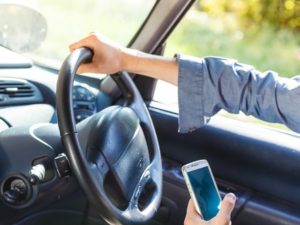 Drivers who text or talk on their cell phones in the state of New York can be given a ticket for a moving violation. Cell phone violations are taken extremely seriously in New York. In fact, a motorist who is cited for a cell phone violation could potentially get more points on his or her license than for almost all other moving violations, except for speeding in excess of 21 miles per hour over the speed limit.

Cell phone tickets carry serious penalties because driving while distracted is considered to be so dangerous. Motorists who drive while texting or talking on the phone can also be held responsible if they cause an accident while engaged in these behaviors and can sometimes face very serious criminal charges.

Because of the severity of the consequences associated with a cell phone violation, it is vital that you take action quickly if you are accused of driving while using your phone or accused of driving while making use of any electronic device. New York traffic ticket lawyers can provide you with information on what your rights are when you’ve been accused of using electronics behind-the-wheel and can help you to understand the possible penalties that you could be facing.

An experienced attorney can also help you to decide on the best course of action for responding when you’ve been accused of violating the state’s laws on distracted driving. You may be able to fight the ticket and avoid the serious penalties that go along with being found guilty of using electronics while driving. Simon Kabzan, Esq could also potentially help you to reduce the penalties associated with this traffic offense.

Call NY Traffic Firm today to find out what you should do in response to your cell phone ticket so an experienced member of our legal team can help you to fight to protect your license.

New York law forbids talking on a handheld cell phone while driving, and forbids texting while driving. It also restricts you from the unsafe use of other electronic devices while you are behind the wheel.

If a motorist is holding a mobile phone in the immediate proximity of his or her ear while the vehicle is in motion, that motorist is considered to be engaging in a call in violation of section 1225-c. Violating this traffic law is a traffic infraction punishable by fines and penalties that grow progressively more serious for repeated violations.

The fine is only the beginning of the serious penalties that can result from getting a ticket for using a cell phone while driving. A motorist who is found guilty of violating laws against handheld phone use while driving could get five points on his or her license. This is more points than any other moving violation, except for traveling more than 20 miles in excess of the speed limit. A motorist who gets 11 points on his license over an 18-month period can have his license suspended, so five points is a substantial amount of points that could quickly put your license in jeopardy.

High auto insurance costs, and a black mark on your driving record are also other possible penalties for phone use.

How a NYC Cell Phone Ticket Lawyer Can Help You

NY traffic lattorney Simon Kabzan has provided representation to many motorists who have been accused of violating laws prohibiting the use of handheld cell phones or other electronic devices. We can help you to fight the ticket or to try to reach a deal where your penalties are reduced in exchange for admitting guilt.

To find out more about the ways in which our legal team can assist you if you’ve been ticketed for using a cell phone while driving, give us a call today.