Failing To Stop For a School Bus

How to Fight a School Bus Ticket in NYC 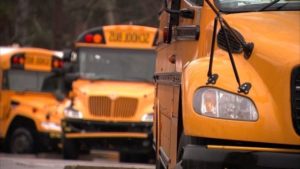 If you are accused of not stopping for a school bus, it is important that you do not pay any fines without first talking with a NY traffic ticket lawyer. If you pay the fine associated with a citation for not stopping for a school bus, this is considered an admission that you violated the law. This means you lose your chance to try to fight the allegations or to try to reduce the potential penalties that could result.

NY Traffic Firm has provided representation to many motorists who were accused of not stopping for a school bus. Our legal team knows the laws and has an in-depth understanding of the types of defenses that you can raise when you are facing a ticket for not stopping for a bus. We can help you to explore your options for protecting your driving record and limiting financial consequences that could result from a failure to stop for a school bus.

Give us a call as soon as possible, as you have a limited time to act and you want to ensure you make informed choices. Our NYC traffic ticket lawyers will assist you in devising the best legal strategy for responding to the claim that you passed a bus unlawfully.

NY Vehicle and Traffic Law section 1174(a) establishes the rules for drivers on any private roads, streets, or public highways who encounter a marked school bus. If a driver coming from any direction encounters a school bus along the road, the motorist is expected to comply with the laws in VTL 1174(a).

According to 1174(a), a driver must stop before reaching the school bus if the bus is stopped in order for passengers to get on or off the bus. The driver is required to stop whenever he bus is displaying a red stop sign. The driver is obligated to remain stopped until the school bus starts to move again, or until the driver is signaled either by the bus driver or by a police officer to continue driving.

Penalties for Failing to Stop for a School Bus

The penalties associated with a failure to stop for a school bus can be substantial. As New York Vehicle and Traffic Law section 1174(c) explains, anyone who is convicted of a violation of the laws requiring motorists to stop for school buses could be fined.

The fine for a fist conviction is a minimum of $250 and a maximum of $400. If a second violation is committed within a three year period, the motorist who failed to stop for the bus the second time could face a minimum fine of $600 and a maximum fine of $750.  If a third violation happens within a three year period, the minimum fine imposed is $750 and the maximum fine is $1,000.

These substantial fines are not even the most severe consequence of failing to stop for a school bus. For a first offense, the motorist could be sentenced to a maximum of 30 days imprisonment. For a second offense within a three year period of time, the maximum period of imprisonment jumps up to 180 days. If a motorist commits a third offense of failing to stop for a school bus, the maximum imprisonment period is also 180 days.  For any offense under New York Vehicle and Traffic Law section 1174, the law makes clear that a motorist could be both fined and imprisoned.

A motorist will also get five points on his or her driver’s license. Accumulating 11 points or more during a single 18-month period can result in a motorist having his or her license to drive suspended.  Five points is a substantial number of points for a motorist. If a motorist commits a third offense of failing to stop for a school bus, however, he doesn’t even have to acquire 11 points on his record to lose his license. A third offense results in the mandatory revocation of the motorist’s license to drive a car.

The record of unlawfully failing to stop for a school bus will also make it impossible to get any job that requires a clean driving record and will send auto insurance rates skyrocketing for most motorists who are convicted of this violation.

How a New York Traffic Ticket Attorney Can Help You

If you are accused of not stopping for a school bus, you should be aware of the very serious legal consequences that could result from this offense. The fines, license points, and potential for incarceration all necessitate that you take these accusations very seriously. One of your best options is to contact a New York traffic ticket lawyer as soon as possible so your attorney can help you to explore your options for trying to avoid being found guilty of this offense.

NY Traffic Firm has helped many motorists to successfully fight a citation for failing to stop for a school bus. Our legal team can also assist you in trying to reduce the penalties and consequences of this offense. To find out more about how we can help you, give us a call today.