Unveiling Ticket for Blocking the Box 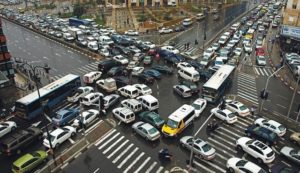 In order for traffic to be able to move smoothly, cars must be able to pass through intersections. Unfortunately, in some very busy intersections- especially in major cities like New York City- traffic can back up for many miles and motorists may find themselves driving aggressively to try to get where they are going as fast as possible.

A motorist who blocks an intersection could be in violation of New York’s traffic laws. Drivers can be ticketed for blocking the box. You need to know the law and know how to respond if you receive a citation. NY Traffic Firm can help.

Give us a call if you’ve been accused of breaking any New York rules of the road, including the rules related to blocking the box. Our legal team can help you to explore defense options, find ways to introduce reasonable doubt, or help with the negotiation of favorable deals to reduce penalties.  Give us a call today to talk with New York traffic ticket lawyers for help.

NYS Laws On Blocking the Box

New York Vehicle and Traffic Code Section 1175 prohibits “blocking the box” by establishing rules and regulations related to the obstruction of traffic at intersections.  The “box” is the center of an intersection, between the four corner’s of the intersection.

Keeping intersections clear is vital to avoiding this kind of gridlock and protecting everyone’s  commute. This law makes an exception, however, for a motorist who are planning on making a turn. A driver is allowed to enter an intersection in order to make a turn, even if the traffic in front is stopped, as long as the driver can safely clear the intersection.

Penalties and Consequences for Blocking the Box

Blocking the box can result in a fine of more than $100 for a motorist.  Within New York City, both police and traffic enforcement agents are able to issue citations for blocking the box. The traffic enforcement agents can issue these citations using handheld devices that are able to scan a vehicle’s registration sticker and pull information from it.   This means more tickets can be issued.

Motorists need to be aware of the possible fines associated with blocking the box. It is also important to realize that there are periodic crackdowns, with traffic enforcement agents routinely stationed at busy intersections to issue citations. If you are cited, you could be forced to pay a large fine.

How a NYC Traffic Ticket Attorney Can Help

If you are accused of blocking the box, you may not simply want to pay the fine and accept that you’re guilty of violating traffic laws against blocking intersections. There may be options available to you to fight the citation with help from a Simon Kabzan – a New York traffic ticket lawyer. You will need to act quickly, as you have only a limited amount of time to try to fight the ticket. You should contact an attorney right away for help finding out what your options are.

NY Traffic Firm has provided assistance to many motorists who were accused of blocking the box. Give our firm a call today to find out how our legal team can help you to try to avoid the fines and other penalties associated with an accusation of blocking the box.